A recurring theme of the negative feedback reflects entrenched white denial, offering insight to why our political leadership tends to avoid addressing directly systemic racism and social class inequity and exposing why the Republican candidates thrive despite what should otherwise be viewed as a collection of buffoons at best and racists, sexists, and classists at worst.

Any time racism and class inequity are confronted, the “individual responsibility” response rings strong. As well, the “I was poor but succeeded” mantra is shuffled out.

What is always notable, however, is that the overwhelming evidence of racism and classism is never directly addressed. White denial always remains trapped in slogans and anecdote.

For example, one online comment addresses the evidence I provided with “if whites are getting paid more than blacks.” If?

The pattern of race-based inequity within the same educational level is not a question, but a fact:

Yet, white denial must hedge evidence in order to continue to cling to the delusion of racial fairness.

The social and policy implications of white denial are significant, but white denial also pervades our schools, notably in schools that serve black and brown children living in communities experiencing concentrated poverty such as New Orleans, Detroit, or the Corridor of Shame in my own South Carolina.

In that context, one comment online is particularly disturbing since it is from a white person who claims to have taught for decades in SC, including years in the Corridor of Shame. This educator blames the parents and students, concluding “I didn’t see any entrenched racism, there is no institutional racism.”

No child should be taught by teachers who blame them for their disadvantages. Of all institutions, schools cannot tolerate white denial.

Destroying the promises of democracy and universal public education, white denial is the warm blanket of delusion that comforts the privileged and keeps them slumbering at the expense of those adults and children suffering the weight of racism and classism.

We must not compound that further by denying that the current race for the presidency is a reflection of that white denial and its power to embrace slogans over reality.

Race and class nastiness resonates among those suffering from white denial, but facts fall on deaf ears.

White denial has real consequences; thus, we must keep in mind that clowns have nowhere to perform without someone building the circus.

And for the record:

Children In Single-Parent Families By Race

After my Op-Ed on school choice ran in the Post and Courier, the P&C ran a letter that literally states, “And there is no ‘white privilege.'” Also great and disturbing evidence of the fight we face since the writer uses every tactic imaginable except addressing the evidence—attacking me, using one example to claim a generalization: 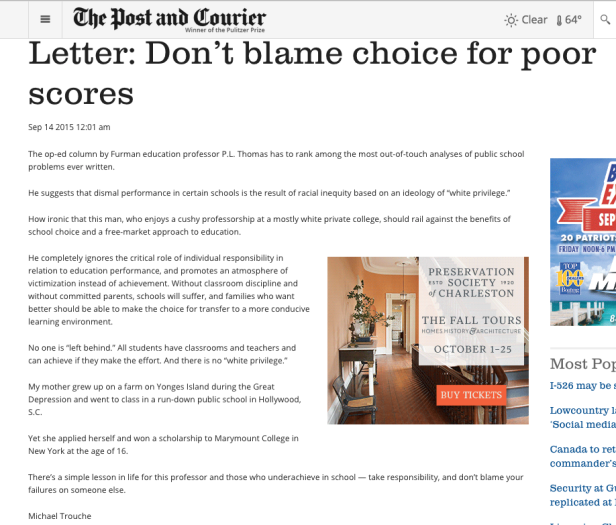