Documentarian Ken Burns—noted for his work on the Civil War—explains that the shift in attitudes concerning the Confederate battle flag across the South and the U.S. parallels another watershed moment in the nation, support for gay marriage (I would add the legalization of marijuana is another similar shift).

Many are rightfully concerned that the massacre of the #Charleston9 is being reduced if not trivialized by the political rush to remove the battle flag from state grounds, license plates, and flags, just as some believe the flag debate allows political leaders and the public once again to avoid a real discussion and then action on gun control.

Let us, then, embrace the flag debate as not a symbolic moment, but a symbolic movement—lowering and removing are actions—that both works with and builds on the momentum of those political and public shifts.

Removing the Confederate battle flag from government display, however, is not banning that flag; individuals continue to have the right in the U.S. to flaunt symbolically their beliefs, however misguided or even hateful, regardless of the mechanism—as long as that free speech does not cross a line into denying others their free speech or threaten harm.

Thus, part of that movement must be personal and public education.

And that education must address the “Heritage Not Hate” mantra that has for too long allowed both the Confederate battle flag and the concurrent racism to survive behind slogans without basis in the facts of history.

The Confederate battle flag has not suffered a change in meaning; its meaning has always been corrupt from its original creation within the larger acts of secession and war.

The “heritage” and “state’s rights” claims are cultural lies by omission: The heritage was one of racism and slavery, and the state’s right was to maintain slavery as the primary mechanism of economic power in the South (an economic dynamic that made a very few incredibly wealthy, but also a system of human bondage that benefitted those who didn’t own slaves, rendering nearly all free people complicit during the institution of slavery).

Many have offered the evidence for that personal and public education, and I offer them below as an opportunity for folding “Heritage Not Hate” into the movement that will embrace those willing to say they have also changed their minds and hearts because they are now willing to face the uncomfortable facts that contradict long-held beliefs.

Debunking “Heritage Not Hate”: A Reader

What This Cruel War Was Over, Ta-Nehisi Coates

“They Can’t Turn Back,” James Baldwin

Ken Burns: Flag issue is not about heritage

The “meaning” of the Confederate flag, Bryan Bibb

How people convince themselves that the Confederate flag represents freedom, not slavery, Carlos Lazada

[Quoted from John M. Coski, the historian at the Museum of the Confederacy in Richmond] 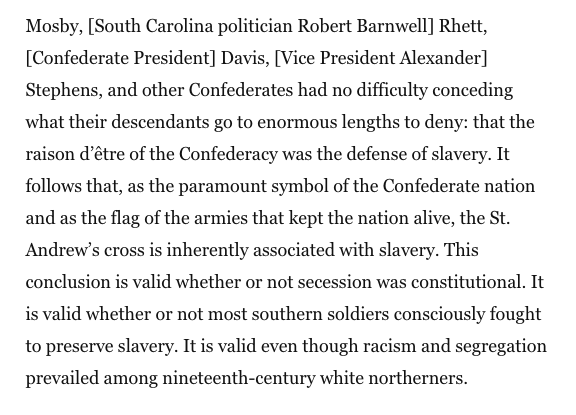 How The South Lost The War But Won The Narrative, Tony Horwitz

“The face of racism today is not a slaveowner”: Eric Foner on the past and present of white supremacy, Elias Isquith

Why do people believe myths about the Confederacy? Because our textbooks and monuments are wrong, James W. Loewen

White support for the Confederate flag really is about racism, not Southern heritage, Spencer Piston and Logan Strother

The South’s Heritage Is So Much More Than a Flag, Patterson Hood

“People know next to nothing about Reconstruction,” Eric Foner 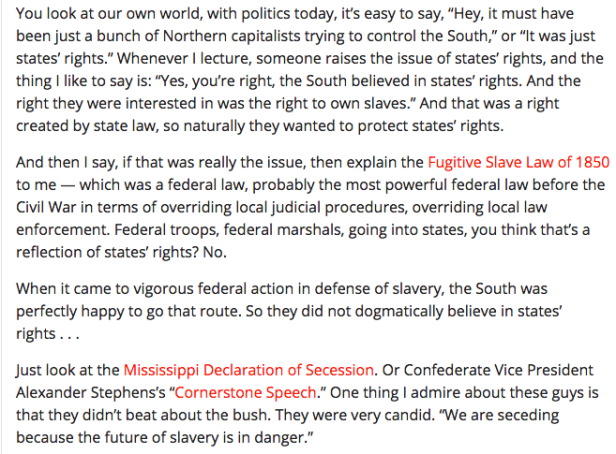 One thought on “Debunking “Heritage Not Hate”: A Reader”