“Not in Kansas,” The National

Dorothy’s journey in The Wizard of Oz was a quest and a mantra—”There’s no place like home”—but Thomas Wolfe has warned us otherwise, You Can’t Go Home Again.

I have been thinking a great deal about nostalgia, the urge to return to something from before, something assumed to be better and normal. The Covid-19 pandemic has coincided with my oldest nephew finally having the time needed to scan hundreds of family photos gathered after the deaths of my parents over a six-month period a couple years ago.

The images are haunting and fill me with nearly overwhelming melancholia. The newest and last batch of scans forced me to consider both the allure of back then and if any moment is really better; is there ever really such a thing as the good old days?

These photographs span decades and generations; many of the oldest black-and-white photos are faded, blurred, but they capture people mostly unsure of how to be while being photographed. There is an awkwardness that puts up masks to whether or not these days were more than the old days, but also “good.”

And family photographs are rich with babies and children, especially babies on people’s laps. There are two in the newest batch that I can’t quite fully process, babies on laps—one of my mother and me, obscured by finger prints, and another of my oldest nephew sitting on my mother’s lap, her beside my father in an eerily red-hued picture from 1983: 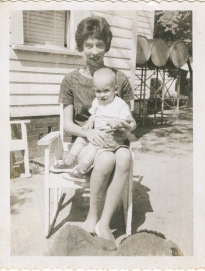 There are about 20-plus years between these images of my mother, and I am turned inside out by my parents’ faces, both looking away and appearing to be quite distant from the moment then in the early 1980s, there with the beginning of a life that will always be inextricably intertwined with theirs.

My oldest nephew, who we call Tommy on our side of the family, carried a tremendous bulk of the responsibility as my parents’ health declined and once they died. His earnest duty to them has persisted as he has scanned these hundreds of photos, I assume, in one effort to hold onto a home that we shared at different times.

I look at these images and feel like Dorothy:

Well, I, I think that it, that it wasn’t enough just to want to see Uncle Henry and Auntie Em. And it’s that if I ever go looking for my heart’s desire again, I won’t look any further than my own backyard. Because if it isn’t there, I never really lost it to begin with. Is that right?

But I also know this to be misguided nostalgia—that you can’t go home again.

The urge to go back to seemingly better times is a powerful political message, however, one resonating in a different way in 2020 during a pandemic that has erased normal from most of our days and nights.

Political messages about reclaiming the good old days has had mixed results.

In 1996, Bill Clinton levered the future over the past:

But Ronald Reagan and Donald Trump have shared political success by taking the opposite stance:

“We ran on a theme: ‘Make America Great Again.’ And a lot of people are saying that may have been the greatest theme ever in politics. Ronald Reagan had a small thing called ‘Let’s Make America Great.’ That was good,” Trump said earlier in the evening. “I don’t like it as much. And he sure as hell didn’t use it as much.”

Those of us leery of the good old days often ask people to specifically identify when and what was “great” in the past, specifying the when but also acknowledging how it was “great” and for whom.

At whose expense is anyone’s happiness?

Bob Dole seems to have lost due to his failure to recognize that a nostalgia for a 1950s U.S. ignored that mid-twentieth century America was often anything except great for large populations of people not like him.

However, even as 2020 is a presidential election year, throughout the world, all of us are now confronted with wanting to return to normal, desiring through a haze of nostalgia to go back to the time before the pandemic.

I have been struck by how unfamiliar now images of crowds seem to me—major sporting events, music concerts.

I am reminded of going with friends to see The National in an outdoor venue in Pittsburg just after the Las Vegas mass shooting. It was a challenging and disorienting experience, but many of us simply attended the event to cling in part to something we considered normal.

It seems entirely reasonable in our current medical crisis to want things as they were before the pandemic. But it is also completely irrational to want to return to the world that brought us to this shut down.

Thinking everything was better in the past is not just nostalgic, but negligent.

Before the pandemic, people across the U.S. lacked health care and stable well-paying jobs. Those facts increased the crisis.

I have been looking through hundreds of photographs and missing the people and the times; it is a powerful thing to want to go home again.

But we can’t go home, we will never go back to normal.

In the aftermath of crisis, in fact, the greatest honor we can pay to our past is to move forward, better people and seeking the very best of Maggie Smith’s final lines to “Good Bones”: “This place could be beautiful,/right? You could make this place beautiful.”