Graceless
Is there a powder to erase this?

“Yes, she is a problem for me,” Adrienne Rich opens in her “The Problem of Lorraine Hansberry” (Blood, Bread, and Poetry: Selected Prose 1979-1985), “as I read and reread the published work and some of the unpublished—copies of letters, interview transcripts, essays.” 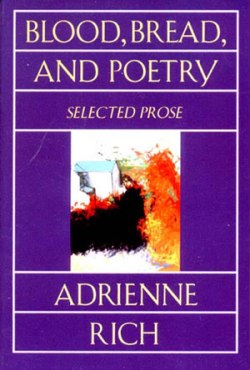 To follow is a series of parallel “As I” sentences in which Rich muses on Hansberry (“a Black woman trying to write both from ‘within the Veil,’ as she once put it, and for a public which included Black women and men, but whose dominant expectations and mythic opinions about the world were shaped by white males”), leading to:

Lorraine Hansberry is a problem to me because she is Black, female, and dead….The problem begins for me when, in reading Les Blancs, I do not know when I am reading dialogue written by Hansberry and when I am reading the end product of the process Nemiroff describes….All this may be forthright and devoted enough, and it may seem graceless to question the end result. But I do question it….But biography by a former husband and literary executor is not the same as autobiography.

This “problem” builds to Rich acknowledging “the limitations of my experience as a white woman.” Rich confronts that “within white feminist criticism itself there have been notable silences, erasures”—and “[t]he Black woman writer, as Barbara Smith has noted, suffers from double erasure.”

In fact, “[t]he study of silence has long engrossed me,” Rich writers in her “Arts of the Possible,” the eponymous essay of her 2001 collection of essays:

The matrix of a poet’s work consists not only of what is there to be absorbed and worked on, but also of what is missing, desaparecido, rendered unspeakable, thus unthinkable. It is through these invisible holes in reality that poetry makes it way—certainly for women and other marginalized subjects and for disempowered and colonized peoples generally, but ultimately for all who practice art at any deep levels. The impulse to create begins—often terribly and fearfully—in a tunnel of silence.

Rich as woman, as gay. Rich as poet, essayist—artist at “deep levels.”

She has presented to us in autobiography/biography that is a poet’s/artist’s work a series of resurrections, exposing who she has been and who she becomes. She has been daughter, wife, and mother; she has been lesbian lover—just as one way through association (the sorts of associations Rich exposed and confronted, “shaped by white males”) to view her metaphorical deaths and resurrections.

Rich struggling through Hansberry is Rich wrestling with her many selves—none of them perfect but all of them the richness of words crafted.

If you have been on Rich’s journey for many, many years—as I have—this volume is redundant but inescapable and invaluable, a Siren’s call to those of us who love books, desire collecting.

1119 pages into her body of work, Rich leaves us with words that seem haunted with James Baldwin (see her “The Baldwin Stamp”):

To read Rich’s entire body of published poetry draws me back to her “Diving into the Wreck,” a tour de force of personal and social commentary as poetic genius.

In death, Rich’s collected poetry presents “a book of myths” as revolt, as liberation—as a problem for everyone holding this heaviest of resurrections that is Rich and is not Rich.

Adrienne Rich: Artist of the Possible and Life among the Ruins

One thought on “The Resurrections of Adrienne Rich: “in a tunnel of silence””