In order to avoid the existential hell known as I-85 where morning commuters creep along bug-like in a daily Kafkan nightmare, I take winding backroads through the Upstate of South Carolina to my university.

Children in this housing development will attend, eventually, Riverside High, which is ranked 13th lowest of 237 SC high schools in the 2014 Poverty Index, has Excellent/Excellent ratings on the 2014 SC report card, and tests only 51/341 students on subsidized meals and 25/341 with limited English proficiency: 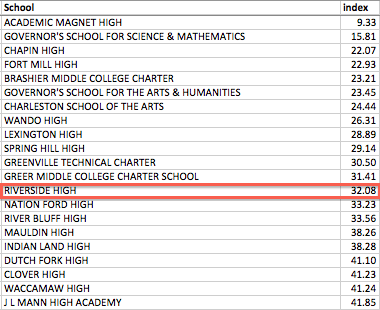 Among four other comparable high schools in the state, they all are rated Excellent:

Having placed student teachers at Riverside High, and knowing faculty there, I can attest that this is a wonderful school, and students are both supported and challenged.

The real estate sign struck me especially since I had viewed two new educational documentaries: Crenshaw, a film by activist Lena Jackson on the Los Angeles school, and 180 Days: Hartsville, focusing on two schools—Thornwell School for the Arts and West Hartsville Elementary School—along the infamous I-95 Corridor of Shame in my home state of SC.

While nearly 2500 miles apart and politically/culturally worlds apart, Los Angeles and Hartsville reflect powerful narratives about the intersections of race, poverty, and education reform. As well, they offer nuance to those intersections since Creshaw High is high-poverty, majority-minority in an urban setting while Hartsville’s elementary schools are high-poverty, majority-minorty in the rural South.

Before discussing each documentary separately, let me highlight what they share as entry points into reconsidering race, poverty, and education reform:

Crenshaw: Disenfranchising through Take Over Strategies

Crenshaw is, as David B. Cohen explains, a “cautionary tale” about school take overs narrowly and education reform built on accountability broadly.

Jackson does a wonderful job in 20 minutes introducing viewers to the students, parents, and teachers whose lives and learning/teaching are dramatically disrupted by converting Crenshaw High into a magnet school as part of a take over plan.

This film is an excellent introduction to how so-called good intentions of political education reform is not only insufficient, but also harmful.

The take over of Crenshaw disenfranchises the students, parents, and teachers highlighted in the documentary and exposes that political leadership (school board and Superintendent John Deasy) often fails to be culturally sensitive or appropriately responsive to the needs of the people they serve.

Ultimately, as in New Orleans, Crenshaw and the take over represent a failure to identify the sources of entrenched problems, to listen to the people whose lives are being impacted by policy, and to be open to alternative views of both problems and solutions.

Crenshaw High is now and has been for decades a reflection of deep and serious social inequity fueled by racism, classism, and an unresponsive political establishment.

Changing a school’s name, firing the adults who have dedicated their lives to students, and ignoring the parents of those students—these appear to be the worst possible actions available, and regretfully, what more and more political leaders seem determined to do.

Hartsville: It’s All about the Tests (I Mean, Children)

As a life-long resident of and career-long educator in SC, I have lived and witnessed the historical and lingering racism and poverty that scar our state and our schools.

In my education foundations and educational documentary courses, I show Corridor of Shame, and we examine issues related to pockets of poverty across SC and school funding.

I also highlight how problematic Corridor is as a documentary since it depends on maudlin music and slow-motion shots of children looking forlorn. The inequity along I-95 in SC needs no emotional appeal; the conditions are inexcusable, and any reasonable person can see that.

In that context, I was nervous about 180 Days: Hartsville—although I do trust and respect co-producer Sam Chaltain and feel that the documentary does offer a much more complex portrayal of education reform, race, and poverty in SC than Corridor.

Broadly, depending on how audiences interpret the narratives of the film, 180 Days: Hartsville challenges the effectiveness of accountability-based reform that focuses on in-school policies only.

That “depending,” however, is huge.

Yes, the two schools and the central family highlighted are wonderful and accurate representations of the huge challenges of public schools in a high-poverty community.

I find the educators, parents, and students extremely compelling and genuine—a tribute to the care taken with the film.

There are also moments that need to be paused, digested carefully: the burdens of working minimum-wage jobs, the pressures of being a child living in poverty and trying to succeed in school, the passion and compassion of educators, and the determination of a parent working two jobs and raising two children alone.

But I am left deeply concerned that too many viewers will not respond as I did to the relentless influence of testing the film captures throughout—because the film is also punctuated with adults expressing a “no excuses” mentality, again with the best intentions.

These educators are supportive and positive, but those qualities cannot temper the weight of testing that has become the end-all, be-all of public schooling—especially for our high-poverty, majority-minority schools.

Viewers watch a highly dedicated principal at Thornwell School for the Arts giving pep talks to entire grade levels of students as well as students preparing to take MAP tests, computerized commercial programs that give detailed and nearly immediate feedback and claim to be strongly correlated with high-stakes state testing.

Viewers also watch as students’ names are moved on a board in front of those students so that each child is listed under her/his status according to the tests.

The money and time spent on MAP and the public labeling of students—not to mention, Where are the arts?—should prompt us all to end the madness that is high-stakes accountability. But, again, I fear many viewers found the story compelling because the educators and students were working so hard, and are characterized as being uniquely successful.

And it is at that last point we must pause.

But, as well, consider Thornwell School for the Arts 2014 school report card:

And how does Thornwell School for the Arts look against comparable schools across SC?:

While the film suggests nearly “miracle” outcomes, the school, in fact, continues to struggle under the burdens of poverty and race; as the classifications above show, the school is typical of schools with similar students.

The film highlights only one of the two ways in which SC evaluates schools—the annual state report card that has been in use for most of SC’s decades of accountability and the federal accountability report (in 2014, Thornwell School for the Arts received a B/86.7 and West Hartsville Elementary, a B/81.1).

Without context, and careful analysis of what data are being portrayed along with why and how (former Superintendent Mick Zais [R] manipulated the federal accountability reports in order to criss-cross the state to “prove” poverty doesn’t matter, for example), viewers are apt to fall under the impression that schools struggling against poverty just need to demand more from educators and children.

However, for me, the key scene is when the principal at West Hartsville Elementary must confront the tremendously complex issues surrounding Rashon, ones that are often outside the ability of the school or even his mother to control.

180 Days: Hartsville is a story of place. It is, like Crenshaw, a cautionary tale, but I suspect one easily misinterpreted.

I think the intent behind this film is to offer Hartsville as a model for education reform addressing race and poverty because the efforts of the educators and students are remarkable and community business has committed to addressing the complex elements of poverty in the area and schools.

However, the film actually reveals that accountability has failed SC and the entire U.S.

The relentless and dehumanizing focus on data—as if people are somehow not involved.

Ultimately what connects Crenshaw in Los Angeles to two elementary schools in SC is this mostly ignored fact: political rhetoric and tone-deaf education policy are not curative but part of the disease.

Once again, there are no miracles—but there are very real and very harmful consequences to demanding the impossible from schools, educators, parents, and children who are ultimately the victims of the racism and poverty political leaders refuse to acknowledge or erase.

What If Education Reform Got It All Wrong in the First Place?, Bill Raden

If there is a lesson in evidence-based research for California policymakers, say Orfield and Gandara, it is that there are limitations to what even the most inspired teachers alone can achieve in a society plagued with inequities.

“I studied a really rich district in Massachusetts,” Orfield noted, “and the kids from the housing projects in the city were just hugely behind when they arrived at school. The schools actually made as much progress each year as the [wealthier] kids did, but the gap never closed at all. So the schools were doing their job, but society wasn’t.”

“I always say, if money doesn’t matter, then why is it that people who have money send their kids to schools that have many, many more resources?” Gandara adds. “I think fundamentally the problem is that other developed nations have social systems that support families and children in a variety of ways: with childcare, with good health care, with recreational opportunities—with lots of things that support healthy development. We have dumped it all on the schools and said, ‘We’re really not going to provide any of these services. You deal with it, schools.’”

No Child Left Behind fails to work ‘miracles,’ spurs cheating

One thought on “From Crenshaw to Hartsville: Race, Poverty, and Education Reform”