The best laid schemes o’ Mice an’ Men
Gang aft agley,
An’ lea’e us nought but grief an’ pain,
For promis’d joy!

“To a Mouse,” Robert Burns

If John Steinbeck’s Of Mice and Men offers a fictional dramatization of Scottish poet Robert Burn’s dire warning in poetry, above, then the mangled federal education policy popularly known as No Child Left Behind (NCLB) may be a top candidate for real-world proof of Burns continuing to be right 230 years later.

Heralded as bi-partisan and bold, NCLB has been unable to manage its central directive: scientifically based policy and practice in education.

The wider accountability paradigm of education reform driven by standards and high-stakes tests and NCLB have proven to be failures, but with the reauthorization of ESEA (NCLB) now on the table, those failures provide ample evidence for how to move forward with education reform and policy.

A policy memo from NEPC now stresses the importance of making evidence-based decisions during reauthorization:

Kevin Welner and William Mathis discuss the broad research consensus that standardized tests are ineffective and even counterproductive when used to drive educational reform. Yet the debates in Washington over the reauthorization of the Elementary and Secondary Education Act largely ignore the harm and misdirection of these test-focused reforms. As a result, the proposals now on the table simply gild a demonstrably ineffective strategy, while crowding out policies with proven effectiveness. Deep-rooted trends of ever-increasing social and educational needs, as well as fewer or stagnant resources, will inevitably lead to larger opportunity gaps and achievement gaps. Testing will document this, but it will do nothing to change it. Instead, the gaps will only close with sustained investment and improvement based on proven strategies that directly increase children’s opportunities to learn.

First, to heal the damage done, we must admit those clear failures. Next, we must change course away from accountability, standards, and high-stakes tests. Finally, we must clearly identify the reasons for educational struggles and failures in order to embrace the best policies and practices to prompt genuine and effective reform.

That reauthorization process, the new reform agenda, and then the daily practice of running schools and teaching students must re-embrace evidence-based policies and practices, but not without clarifying exactly what that means.

Two powerful lessons about creating evidence-based policy and practice can be drawn from the NCLB era: (1) simply codifying and mandating policy and practice must be evidence-based do not make that occur, and (2) the National Reading Panel’s procedures and outcomes highlight that “evidenced-based” when politicized is just as subject to human whims and corruption as anything else.

The inevitable train wreck of the Common Core (doing the same thing over and over while expecting different results) can be avoided now if we learn from NCLB; otherwise, we continue a long history identified by Lou LaBrant, former president of NCTE, in 1947: “A brief consideration will indicate reasons for the considerable gap between the research currently available and the utilization of that research in school programs and methods.”

What Are Evidence-Based Practices and Policies in Education?

What counts as evidence has been the basis of stringent debate within the disciplines throughout the history of organized disciplines. In fact, that tension is how disciplines continue to seek knowledge, define themselves, and thus crawl closer and closer to the ultimate goal of Truth.

The two lessons noted above, however, show that once partisan politics are the process for mandating what counts as evidence, the credibility of that evidence is essentially destroyed.

Along with the National Reading Panel (NRP), A Nation at Risk demonstrated as a process how partisan political goals corrupt evidenced-based conclusions. The panel creating A Nation at Risk and the NRP had conclusions dictated first and then selected the evidence to reach those conclusions. Codifying what counts as evidence through a political process corrupts knowledge (and thus policy and practice) while forcing disciplinary debate about what counts as evidence to remain on the sidelines (and thus ineffective).

Briefly (and at the risk of oversimplification), the debates within fields over what counts as evidence tend to be between those embracing quantification and generalizability and those who who embrace qualitative data in order to raise and pursue essential questions.

In most disciplines, experimental and quasi-experimental (and thus quantitative) research has historically (and still currently) dominated those debates. The rise of qualitative research, however, has both expanded the disciplines and forced quantitative analysis of the world to address that reducing phenomena to numbers is both limited and limiting.

So the first problem with codifying what counts as evidence through the political process is that mandates (through legislation and funding) narrow and render static a process that must remain vibrant and organic in order to be effective.

Since it is difficult to clearly separate policy and practice in education, let me end with some concrete examples in order to give the bones of the question what counts as evidence flesh: corporal punishment, grade retention, and teaching reading.

Corporal punishment remains relatively common in parenting in the U.S., but it also lingers in schools in about a third of states. The American Psychological Association (APA), however, has a clear stand against corporal punishment based on over 60 years of evidence.

This represents one level of the needed relationship between government mandates and the disciplines as that informs education: When a professional field has a clear understanding of an issue, policy should reflect that stance. In other words, corporal punishment should be banned in public schools—not because some partisan political committee has studied the issue, but because the APA has done so and over a long period of time, while taking into consideration a wide and varied body of evidence.

A second level of the needed relationship between government mandates and the disciplines as that informs education is grade retention. Like corporal punishment research, grade retention research is robust and suggests that grade retention is mostly harmful. But at this second level, how the political process fails is strongly highlighted. Currently, states are mandating the opposite of what the research reveals (embracing high-stakes testing as a trigger for grade retention).

At this second level, based on the disciplinary evidence over a long period of time and built on a wide and varied body of evidence, grade retention must not be mandated, but not banned either. In cases such as grade retention, policy should caution against the practice, but allow that, as the research shows, some children may benefit from the practice, but professionals closest to those case are best for making that decision.

Reading policy and practice are possibly the most debated areas of partisan political agendas. Everyone believes children need to learn to read—and almost everyone thinks s/he knows how that should happen.

The lesson at this third level is that political policy always corrupts classroom practice because classroom practice is never as simplistic as policy. Even the gold standard of experimental research fails the teacher in her day-to-day work because her classroom is not a random sampling of students, because her work is mostly with outliers. 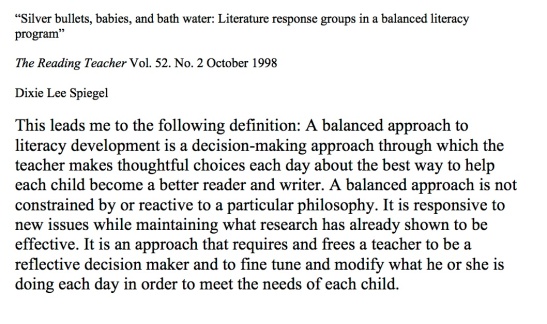 The third level, then, is the arena of professionalism. A reading teacher must come to class equipped with the knowledge of her field of literacy (one powerfully informed by whole language and balanced literacy, for example, but also a field in constant tension due to the debates about what literacy is and how to teach it), and then, capable of providing different students different approaches in order to provide the learning needed in the pursuit of each child’s literacy.

The evidenced-based real world of teaching reading is messy, chaotic, and cumulative over a period of time that cannot be predicted for any individual child.

Simply put, no politician or political committee in DC or any state house has any business or ability to mandate the daily teaching of children. The political job is to ensure professionals have the opportunity to be professionals—and to create a process of transparency so that tax payers know that professionals are provided for children and doing their work as experts in the disciplines.

Federal and state policies are misguided when they are prescriptions that supersede the complex and on-going knowledge of the disciplines.

As the NEPC memo above notes, what counts as evidence now in education reform is the political disaster that is NCLB. The grand lesson of that evidence is that political mandates in education—detailed in three levels above—are creating problems, not solving them—and at tremendous expense.

In education reform, we need political humility and a new era of recognizing both the existing power of the disciplines and the the professional possibilities of teaching.

If our goal is truly evidence-based practices and policies in education, the evidence suggests we must first have partisan politics step aside.

2 thoughts on “What Are Evidence-Based Practices and Policies in Education?”