While I have argued that we basically do not like children in the U.S., there is considerable evidence that being born a child of color puts those children at a disadvantage relative to white children.

Based on the Kids Count report, Race for Results, Smriti Sinha has declared:

Black families pondering a move to the Midwest might want to read this, especially if they have young children. According to a national report, Wisconsin has been ranked the worst state in the country when it comes to racial disparities for children.

But the entire U.S. does not fare well in terms of addressing the needs faced by children of color.

“Opportunity has been a constant theme in our country’s narrative, beginning with the waves of immigrants who arrived from across the globe in search of a better life,” the report begins, adding, “Last year, for the first time, more children of color were born in the United States than white children” (p. 1).

Opportunity, then, in the future of the U.S. will be increasingly multi-racial, but access to opportunity does not have to remain a race, a competition among those races.

Yet, children who happen to be born white in the U.S., and especially if they are born affluent, start well ahead in the so-called race of life.

Social inequity remains grounded significantly in race and class, as measured in 12 indicators in The Race for Results Index (see p. 6):

As the national data show, no one group has all children meeting all milestones. African-American, American Indian and Latino children face some of the biggest obstacles on the pathway to opportunity. As Figure 2 illustrates, Asian and Pacific Islander children have the highest index score at 776, followed by white children at 704. Scores for Latino (404), American Indian (387) and African-American (345) children are considerably lower. (p. 8) 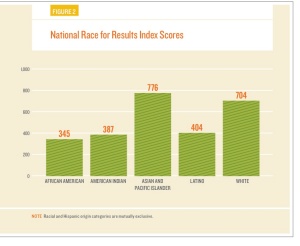 While the overall inequity for African American and Latino/a children [1] is nation-wide, many states—often high-poverty and high-minority states (such as my home state of SC)—rank low in childhood opportunity for children of color:

The report concludes with four recommendations:

Gather and analyze racial and ethnic data to inform all phases of programs, policies and decision making….

Use data and impact assessment tools to target investments to yield the greatest impact for children of color….

Develop and implement promising and evidence-based programs and practices focused on improving outcomes for children and youth of color….

As profound demographic shifts, technological advances and changes in global competition race toward us, no individual can afford to ignore the fact that regardless of our own racial background or socioeconomic position, we are inextricably interconnected as a society. We must view all children in America as our own — and as key contributors to our nation’s future. (p. 28)

As I have stated about the paradox of race, the U.S. is neither a post-racial country, nor should that be our goal. Along with genuinely acting as if “they’re all our children,” we must see race as a part of an equitable society and set aside reducing life to a race to the top that must sacrifice some for the good of a few.

[1] This post focuses on the racial dynamic of white, African American, and Latino/a since my work primarily addresses SC, where that dynamic is dominant. Not addressing the remaining ethnic groups in the report is not intended to marginalize those children or the significance of any racial minority.

5 thoughts on “No Country for Young Children of Color”